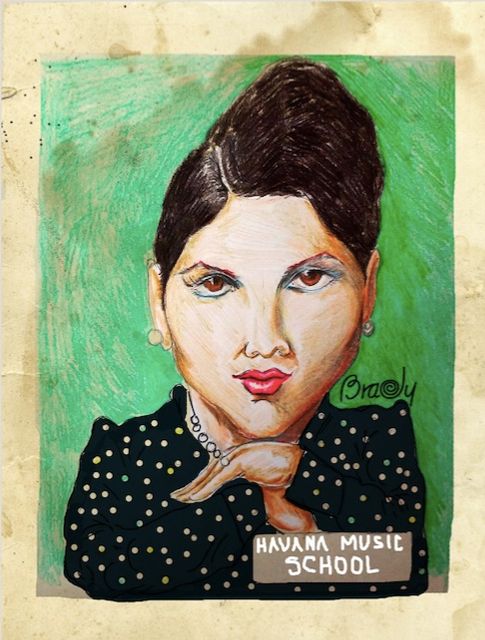 There are facts that say that the musical talent is on the genes, and it is transmitted from one generation to another.

This is the case of the Cuban singer Haydée Milanés, whose name can only be associated with his father, the celebrated guitarist, composer and songwriter of the Nueva Trova, Pablo Milanés.

At her 35 years, Haydée is considered a remarkable artist and has shared stage with musicians like Hernán López-Nussa, Roberto Carcasses, Descemer Bueno, Polito Ibáñez, Omara Portuondo, David Blanco and José Luis Cortés, among others. The shy and jazzy style impregnated on her songs has been compared to a Norah Jones, born and raised on this Caribbean island.

Haydée Milanés was born in Havana in 1980. At the age of 6, she began studying piano and singing at the Elementary School of Music Manuel Saumell, place that has seen other stars of the contemporary Cuban music like X Alfonso and Harold López -Nussa. Later, at the Conservatory Amadeo Roldán, she learned music theory and choral direction.

Her career officially began in 1999, when she joined as vocalist to the jazz quartet of the Hernán López-Nussa, great Cuban pianist and composer. The following year, she made her first international tour, playing at the Heineken Festival in Sao Paulo, Brazil.

In Rio de Janeiro, the quartet recorded the album From Havana to Rio, featuring other Cuban stars  such as Pancho Ferry and the renowned Cuban percussionist Tata Güines.

Back in Cuba, she began working in the famous The Fox and the Crow (La Zorra y el Cuervo) Club in Havana, which often jam sessions with Roberto Carcasses, director of the Interactivo musical project. In 2001 she traveled with Descemer Bueno to New York city, where she played much of the repertoire of this Cuban composer and singer. Closely linked to this work, songs like Tu nombre, Libélula, Tú y yo y Tanto amar where popularized.

The Golden heiress of the Milanes family

Other notable endeavors includes the albums A la felicidad and Haydée Milanés en vivo, the latter a live album released in 2008, featuring his father, Pablo Milanés and her sisters Lynn and Suylén Milanés. Throughout her career, Haydée Milanés has covered with her voice musical genres as diverse as jazz, soul, pop, funk, rock, Brazilian rhythms and, more recently, Filin.

Although there is a substantial difference between her and her father in vocal range, Haydée itself admits that Pablo Milanés remains as her inspiration, pride and a commitment to improve every day.

If you’re a Haydée Milanés follower, share this article on your social networks to let your friends know more about this artist. And leave us a comment, if you think that the saying “Like father, like daughter” applies.