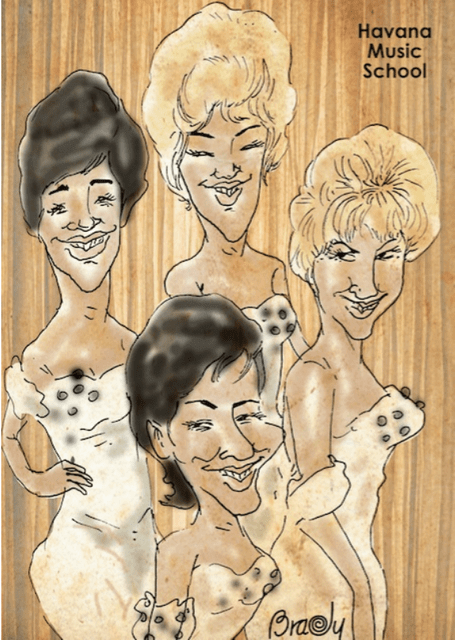 The history of Cuban music is full of great female voices, but few have achieved immortality as the Aida’s quartet members. Under the direction of Aida Diestro, they forged a legacy that no music lover can overlook.

The members of the quartet raised the quality of the feeling genre that was done on the island. They shared the stage with many musical geniuses, such as the immortal Nat King Cole, Bebo Valdes and Chico O’Farrill.

It all started when Omara Portuondo and her sister Haydee decided to form a duo. In the process they knew Elena Burke, who did not hesitate to join the project. At first, they wanted to found a mixed vocal group, which revived the style of the Orlando de la Rosa’s quartet.

But the idea changes when handed the reins to Aida Diestro, who proposes a quartet of female voices and then is when the group was completed by Moraima Secada. Under the direction of master Diestro, the group successfully exploited the voices of each of its members to create a montage of four voices, unique in Cuba.

In 1952 was the debut of the Aida’s quartet. The girls were presented in the television program Carousel of Surprises. His presentation was a success, which opened the doors to a second program called Noon Show.

Despite the successive changes among its members, Aida’s quartet manages to hold on the peak of success in the 60s, becoming one of the standard bearers of Cuban music groups, they performed successfully both within and outside the country.

In the 1970s the group undergoes a major transformation when Aida’s quartet incorporates an orchestra. Also in 1973 dies the director and chief architect Aida Diestro, being replaced in the direction by Ricardo Pérez.

Without leaving the traditional feeling that has always characterized the quartet, they manage to become a reference for traditional Cuban music, especially the son and cha cha cha. With the entry of electronic instruments, the group also suffers the influences of Rock and Pop music.

In 1999, Ricardo Perez decides to settle permanently in the United States and announcing the dissolution of the group. But in 2005 Lilita Peñalver decided to revive the group, appearing on several occasions during that year and the next.

In 2007 several former members gather to pay homage to Aida Diestro. This would be the last performance of Aida’s quartet, bidding farewell to the stage and the audience that both admired and still loves them.