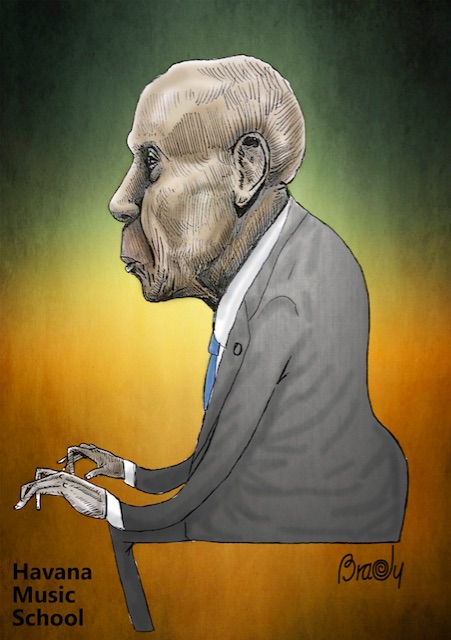 If you admire Cuban rhythms, you have probably heard about Bebo Valdes.

This brilliant pianist, composer, arranger and Cuban bandleader, is considered a star of popular music and Afro-Cuban jazz. Throughout his life, he shared the stage with artists like, Pio Leyva, Rita Montaner and Nat King Cole. In addition, he is the father of renowned musician Chucho Valdes.

Ramón Emilio Valdés Amaro (Bebo Valdes) was born on October 9th, 1918 in Quivicán, in the curent province of Artemisa. He studied piano with Moraima Gonzalez and received voice lessons, harmony and composition from Oscar Bofartigue.

Since that time he has already shown his talent for music and improvisation. His debut as a professional artist was with the Happy D’Ulacia Orchestra, and he also worked during the 40s with the orchestras of Julio Cueva, García Curbelo and the Tropicana Orchestra. Also, he made several recordings with various groups of Afro-Cuban jazz.

Since 1948, he began to work at the Tropicana cabaret as accompanist and arranger of Rita Montaner. His orchestra, Sabor de Cuba, shared the night scenes with Armando Abreu. Here he had the opportunity to work with big American stars like Nat King Cole.

By that time, the musicians of that country travelled to the island to jam with Cuban jazz musicians. Bebo Valdes was part of many of these jam sessions, animated by the percussionist Guillermo Barreto.

In 1952, he unveils its new batanga pace in the station RHC Cadena Azul. He created a band of twenty musicians, including Benny Moré. Although that same year he travelled to Mexico to make a record of batanga, the novel genre is not popular and remains for history.

In 1955, he recorded Havana Holiday at the studios of the Cuban radio station Radio Progreso and She Adores the Latin Type for the Decca label. This last album includes songs from jazz, mambo, bolero, cha-cha-chá and even jazz with Bepop trends.

In 1957 he was hired by Peer Internationtal Music Publishers as arranger of the singers Pio Leyva and Xiomara Alfaro. This group had the support of his son Chucho Valdes and other artists like Reinaldo Henriquez, Orlando Guerra (Cascarita), Ada Rex, and the star of the moment: Benny Moré.

After many years… international success

Bebo Valdes left Cuba in 1960 to settle in the Swedish city of Stockholm. After marrying in the Scandinavian country, it remains outside the artistic creation until 1994, when Paquito D’Rivera invited him to record a new album. Titled Bebo Rides Again, this album compiles several classical music, including original songs from Bebo.

The Spanish filmmaker Fernando Trueba invites you to participate in the documentary Street 54. Following this, Bebo Valdes is reunited with old friends as Patato Valdes and Israel Cachao Lopez, and his son Chucho Valdes. Bebo gets his first Grammy for Best Tropical Album with the album El arte del sabor, produced by Trueba, with whom he performed 8 more albums and a documentary entitled El milagro de Candeal.

The Lágrimas negras album, a compilation of Cuban songs with gypsy touches created by the singer Diego el Cigala, gets him another Grammy and 3 platinum records. Before dying, he recorded the album Bebo and Chucho Valdes: Together forever, a tribute to the great successes of Cuban music, which plays in company with his son. The great artist died in Stockholm on March 22nd, 2013.