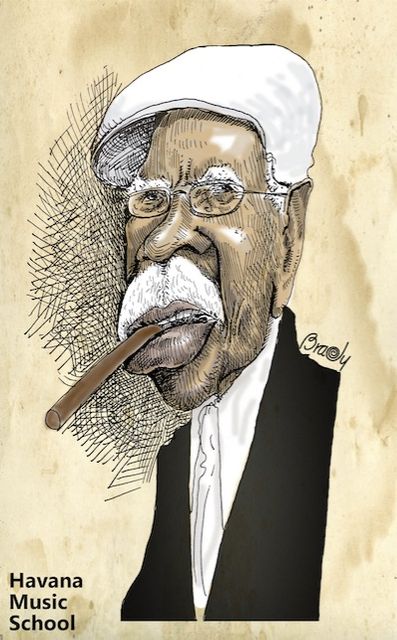 Pio Leyva, known as the Montunero of Cuba, is a singer and composer considered a legend of Cuban popular song.

Smooth singer and genius of improvisation, he is the author of the famous guaracha El mentiroso. He has performed with artists like Bebo Valdes, Benny Moré and Compay Segundo.

Wilfredo Pascual Leyva was born on May 5th, 1917 in Moron in the (current Ciego de Avila) Cuban province of Camaguey. From humble family, this little restless, cheerful and chatty, soon demonstrated his talent for music and improvisation.

Pio’s youth does not pass without acting on the radio station CMJX Moron, forming duos and trios of voices and guitars with Ñico Morgado, Miguel Angel Piña and Enrique Blazo. He plays the bongos and maracas in Siboney orchestra. After singing in trios and other ensembles, he made his debut as a professional singer in the Sexteto Caribe, directed by Juanito Bles. Later, he joined the orchestra of the Hermanos Licea, in the city of Camagüey.

During the ’50s, he arrives to Havana to shine along with prestigious groups of the era, including the orchestras of the Hermanos Martín, Mariano Mercerón, Esteban Antúnez y Mario Ruiz Armengol. His version of the piece El cangrejo no tiene ná throw him to fame as a star of son.

In 1956 he recorded two test albums for RCA Victor, with the renowned jazz band Sabor de Cuba, of the pianist and arranger Bebo Valdés. Some tracks recorded are his famous Chapaleando and Sin caña y sin platanal. In addition, he recorded the LP’ Soy de Jaronú with the orchestra of Mariano Merceron.

Groups such as the group of Compay Segundo and the orchestras Novedades, Cosmopolita y Monumental invites him to participate in their recordings. Titles like Yo bailo con ella, Ritmos de Cuba, Chachachá, Mis tres mujeres and Pío mentiroso, reinforce the success of his firsts records. Known as “the Montunero of Cuba”, Pio Leyva shines in genres like guaracha, rumba, mambo, bolero, merengue and son.

Around the World in montuno

In the early ’70s, he recorded El canto a La Habana and El yerbero moderno with Bebo Valdes. Between the 80s and 90s, he is a member of Compay Segundo y sus Muchachos, together with which he gets to be in such distinguished venues such as Olympia in Paris. In 1995 he shared the stage with musicians like Puntillita, Ruben Gonzalez and Ibrahim Ferrer in the group Afro Cuban All Stars.

With a long a successful history, this great star of Cuban music dies in Havana on March 23th, 2006.