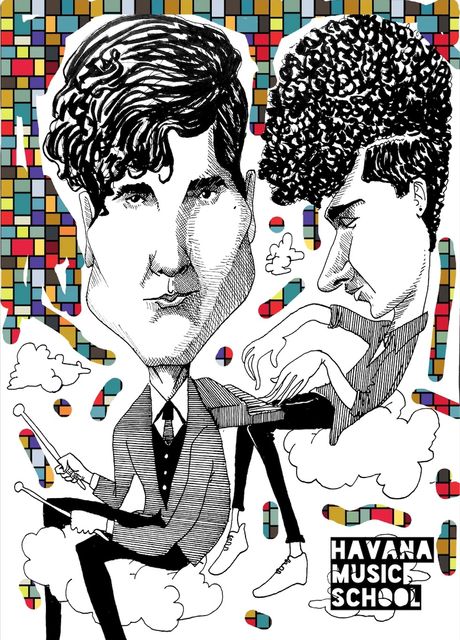 Cuban pop exists and has its most genuine representation in the group Nube Roja, which brings together young musicians with a fresh and well-executed proposal.

Its founders, Anthuan Perrugorría and Lázaro Peña, had already worked with artists such as Danay Suárez, Haydée Milanés, Descemer Bueno and X Alfonso, when they decided to form their own project.

The beginnings of Nube

In 2013, Lázaro Peña and Anthuan Perugorría joined their talents to found the Nube Roja group. Anthuan was a graduate student in the specialty of drums at the Amadeo Roldán Conservatory in 2006, while Lázaro was a piano graduate at the Instituto Superior de Arte (ISA) in 2012. After several performances and tours with other artists, they decided to write a song together. From their alliance born “Dibujemos el camino”, the song that led them to create Nube Roja.

As a permanent collaborator they have the advice of Jorge Perugorría, actor, film director and painter who is in charge of everything related to his image and audiovisual projection.

The XII Gibara Film Festival, Holguín received them on their stages during the closing of the 2016 edition. Likewise, in 2017, they were one of the groups invited to the opening of the Piña Colada Festival in Ciego de Ávila.

These young musicians are looking for a new sound and their productions go through a spectrum with a pop base that includes elements of jazz, funk, rock and roll and electronic music, but with an inevitable Cuban stamp that distinguishes them from other proposals. The Nube Roja format includes piano, keyboard, guitar, bass, brass and drums.

Their musical career has been accompanied by very good quality video clips so they have been nominated several times to the Lucas Awards. In 2013 they were nominated for Best Pop Rock Video with “Nube Roja“, in 2014 they competed in the categories of Pop Music Video and Pop Rock Video with “Quiero conocerte” and “Control“. Also in 2015 they were nominated for Pop House Electronic Music Video for their work in “Sin Control” and in 2016 they participated in the Pop Fusion Music category with two videos: “Un sitio para ti” and “Fonky Songo“.

Dibujemos el camino was the first record production of the band, under the EGREM label and where they had luxury guests like Orishas, ​​Miguel Bosé and Yerbabuena. The video clip that accompanied this album “Sin control“, directed by Joseph Ros, helped them to insert themselves in MTV Latina. It is an album with ten tracks and a bonus track with an interesting fusion and a fun and sticky sound.

His second album, Nube Roja, is in fashion and is characterized by a more consolidated work that goes from the cover to the balance in the recorded songs. This type of music is very necessary for the health of Cuban music because it refreshes the musical environment with light lyrics and infectious rhythms.

If you found this article interesting, support us by sharing its content on social networks and subscribing to our website, to always be aware of the best of Cuban Music.