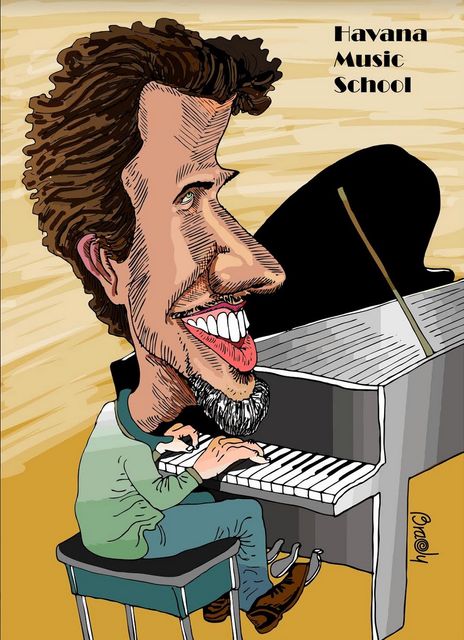 Robertico Carcassés is the son of an Afro-jazz pioneer like Bobby Carcassés.

However, although his influence is very strong, Roberto decided to follow his own path as a musician. Virtuous pianist, his way of understanding Latin jazz has earned him much applause among his audience as one of the most talented figures in the Cuban music scene… which is saying a lot.

Musical from the cradle

Roberto Julio Carcassés Colón was born in 1972, in Playa de La Habana. With a father as multifaceted and prolific as Bobby Carcassés, undisputed showman, singer and instrumentalist, it was predictable that his son would follow in his footsteps.

Robertico leaned toward the piano, although at the National School of Art he studied percussion. In this way, he confesses that he thinks as a musician in the key of both instruments, paying special attention to the rhythm.

Influenced by great musicians such as Emiliano Salvador, Chucho Valdés, Ernán López Nussa and Frank Emilio, Roberto is also interested in rock and roll as well as funk and even timba. But definitely his passion and his musical starting point is jazz.

A star with own light

Robertico played three years in a row at the Jazz Plaza Festival in Havana from 1994 and shared a recording studio with his father on the 1998 album “Jazz Timbero”.

However, the young musician had chosen a different path than the one from his father. After graduating he toured with Santiago Feliú in Latin America and Europe. Then he joined the Afro-Cuban jazz group “Columna B”, and recorded the album Twisted Noon.

Back in Cuba, he recorded his first album Invitation (2000). He was also revealed as a producer and arranger, working on the albums Air of Havana by Selma Reis and Trampas Del Tiempo by the duo Gema Y Pavel.

Robertico, the one from Interactivo

But perhaps his most audacious achievement was the foundation in 2001 of the “Interactivo” project, together with the best talents of Cuban eclectic music. Telmary Díaz, Francis del Río, Yusa, William Vivanco and many more have participated on this project, under the concept of timba-funk.

From that moment, everything has been successes for Robertico: he has composed for movies and theater. All this, without forgetting to cultivate his enormous talent as a pianist.

If you want to know more about the performance of this and other Cuban musicians, subscribe to our website. And help us spread good Cuban music by sharing this article on your social networks.