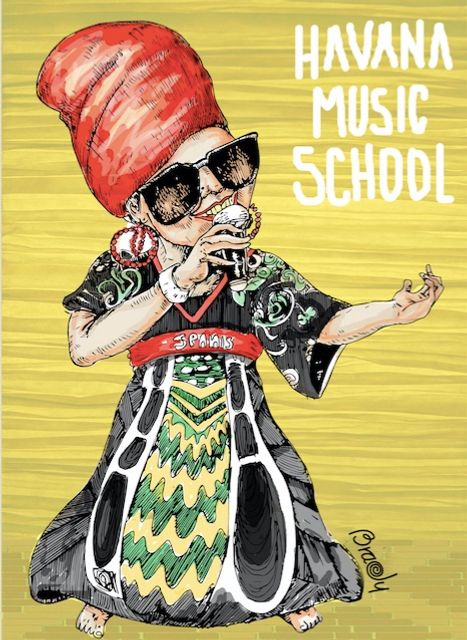 An “anything goes” musical would be the ideal way to describe the work of Telmary Diaz.

Known for its nickname “Telmary”, it is one of the most representative artist of the Cuban alternative music scene. In her rhymes there is a rare but appealing mixture of styles ranging from the Cuban repentismo to the influences of Brooklyn.

The main objective that she always pursues with her music is to communicate, say, express her feelings. That is why her lyrics are characterized by the message left, earning nicknames like “The Sorceress of the word”, “jazz-poet” or her favorite “street poetess”.

With a microphone in hand and with a popular language, Telmary seduces the audiences with its cultural miscegenation, her simple style and her message full of faith; although she doesn’t hesitate to call things by their name. As always do the main representatives of hip-hop.

Telmary is the daughter of a journalist from Radio Rebelde, hence its initial inclination towards this profession. Although she has not studied at the University (she studied English Language and Literature at the Pedagogical Institute of Havana), somehow she has followed the footsteps of her mother, but through music.

Everything was the result of an invitation that made her to participate in a contest freestyle, where she discovered that through rap was they way she wanted to express and convey her message. Fusing her two great passions, Telmary has managed to create a sort of rhymed story, getting where the traditional journalism can not.

In 1999 it was created “Free Hole Negro”, a group of Hip Hop, which is integrated with Papo, Leo and Lester. In this context, Telmary begins to emerge as one of the first females of the Havana underground scene. The group released the CD Superfinos Negros in 2005. In 2002, Telmary joins the “Interactivo” project, founded by pianist Roberto Carcasses, where her style of rap was completed and consolidated.

The result of this collaboration, were two albums: “Goza Pepillo” and “Cubanos por el mundo” (Cubans around the world). The first of them won the Best Album and Best Album novel fusion in Cubadisco 2006 Awards. Telmary has also collaborated on albums of artists like Descemer Bueno, Aceituna sin Hueso, Kelvis Ochoa, X Alfonso, Francis del Rio and Yusa, among others.

Up to date, the street poetess has released two solo albums: “A Diario” in 2007; and “Libre” in 2014. Both albums won the award for Best Hip Hop Album of the Cubadisco in their respective years. In them, Telmary worked with artists of the stature of Athanai, Ojos de Brujo, Kumar, William Vivanco, Mayito from Van Van and Tania Pantoja, just to mention a few of them.

Besides music, the singer has dabbled in Cuban movies like “Havana Blues” and “Alborada Carmesí”. She has also made music and performed in the theater. A versatility that shows why Telmary Diaz is one of the greatest talents of her generation.

The woman from Havana has become a sort of ambassador of the Cuban culture, whether in Canada, where she has lived for many years, in the streets of St. Clair, Toronto; or in other places where she has traveled like Japan or Europe. Alone or with other artists, Cuban rapper misses no opportunity to show off the rich musical tradition of her country.

If you know and enjoy the music of Telmary, share this article with your friends on social networks. And do not forget to leave us your opinion about this great musician.