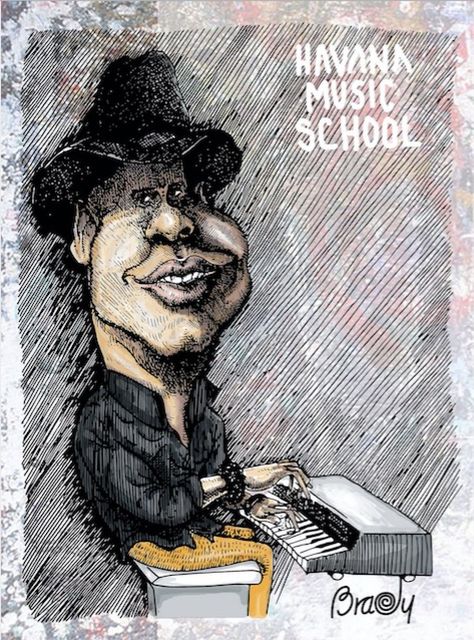 Despite his youth, pianist and Cuban composer Roberto Fonseca belongs to the constellation of stars shining around the world with own light.

His dizzying career was always accompanied by international figures, as Roberto Fonseca is one of those musicians who like to show that there are no barriers between countries when instruments are played. With a style that fuses various genres such as jazz, classical music and Afro-Cuban rhythms, it is considered a musical prodigy and one of the most prominent talents of contemporary Cuban music.

Roberto Fonseca was born in Havana, Cuba, in 1975, and at the age of 14 he began experimenting with the fusion of American jazz and traditional Cuban rhythms.

A year later, he debuted in concert during the International Jazz Plaza Festival 1991. In 1999 he released his first album, En el comienzo, featuring the saxophonist Javier Zalba and the Temperamento band.

Roberto Fonseca, wearing the world with a suit

In 2000 Fonseca recorded the album No Limit: Afro Cuban Jazz for the Japanese label JVC and enrolls in a tour with the prestigious Cuban band Buena Vista Social Club. During this period, Roberto Fonseca has the opportunity to work with masters like Ibrahim Ferrer, Cachaíto Lopez, Guajiro Mirabal and Manuel Galban.

He plays in more than 400 concerts in prestigious places like the Beacon Theatre in New York, the Albert Hall in London, the Palais des Congres de Paris, the Sydney Opera House and Frankfurt Alter Oper. Later, he works as arranger and producer of Mi sueño: Bolero Songbook, the last album of Ibrahim Ferrer.

Then, he started a solo project called Zamazu, fusing traditional Cuban music, classical and Afro-Cuban rhythms. Zamazu has the presence of the Brazilian musicians Alê Siquiera and Carlinhos Brown, flamenco guitarist Vicente Amigo and the cuban performers Cachaíto Lopez and Omara Portuondo. Llegó Cachaíto, one of the tracks on the album, is included in the soundtrack of the film Hancock, starred by Will Smith.

Roberto Fonseca spent the next two years to present this album worldwide and co-produce, with Nick Gold, the last work of the late Ibrahim Ferrer. Through their actions, the album was nominated for a Latin Grammy in 2007 for Best Traditional Tropical Album. Roberto launch Akokan in 2009, featuring the american guitarist Raul Midon and the Cape Verdean Mayra Andrade.

It also collaborates with the British DJ Gilles Peterson to launch the Gilles Peterson presents Havana Cultura new Cuban Sound project. In 2010 he presents the Roberto Fonseca Live in Marciac album, as part of the collection undertaken by the Jazz in Marciac Festival. 2012 set a new point of inflection in his career, recording the disc Yo, loaded with strong African roots.

Talent, virtuosity and camaraderie among nations are words that characterize Roberto Fonseca. If you liked this article and want your friends to know this prodigy, share it on your social networks. And if you want to know more about the best music of Cuba, please subscribe to our website.