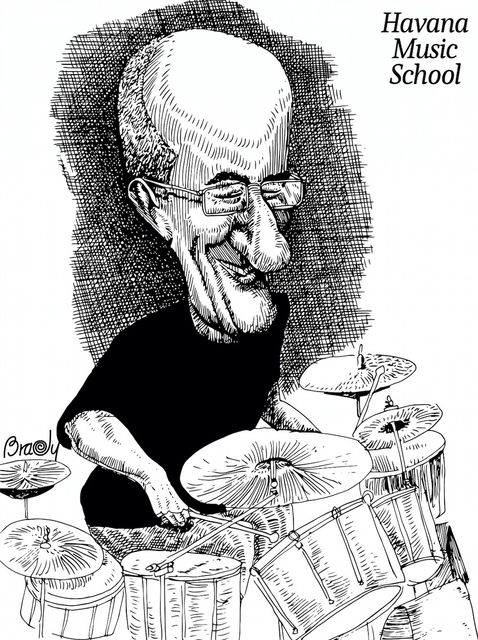 Ruy López-Nussa Lekszycki is considered one of the most acclaimed and relevant Cuban musicians and percussionists who also act as a music teacher and essayist.

He was born in Mexico City in 1957 and, the following year, moves with his family to Havana, Cuba. According to Ruy, his parents, friends and teachers were essential not only at the beginning of his career but also in his subsequent training as a musician. It is not trivial, then, that in 1976 he finished the average level of music in the specialty of percussion and in 1982 he concluded his studies at the Instituto Superior de Arte.

In that same year he began his work as a teacher at the Provincial Art School of Pinar del Río and, on his return to the capital, he first joined the faculty of the Alejandro García Caturla Conservatory and later the Amadeo Roldán Conservatory.

The professional career of Ruy López-Nussa has been extensive and diverse. He started as a drummer for a young rock group and then, as a companion of the famous singer Beatriz Márquez, it turned out to have an excellent career. Also his integration to the group led by the composer and guitarist Pedro Luis Ferrer marked a milestone in his artistic life. It is at this stage that he participates in the recording of one of the most beautiful and internationally recognized phonograms: En espuma y arena.

But undoubtedly La Academia is his masterpiece, a project created and directed by him where he also serves as a drummer. Accompanying him in this group are excellent musicians (trumpeters, pianist, bassist, saxophonist, percussionist and singer) who fervently defend fusion music. And it is with this group that launches his phonogram Ruy López-Nussa presents La Academia, nominated in Cubadisco 2015 in the category of Cuban Jazz.

The tours of different countries and sharing scenarios with other artists have not allowed him a minute of rest:

• With the troubadour Santiago Feliú (Colombia and Argentina).

• With the Estado de Ánimo Group (III Jazz Festival of Barcelona and in Galicia, Spain).

• With Ramón Valle and his group Brújula (Jazz Festival of Bogotá, Colombia).

• With the Temperamento Group (Italy and Switzerland).

• With the pianist and composer Ernán López-Nussa (Ecuador).

And from their participation in festivals what can be said:

• World Festival of Youth and students in the German Democratic Republic.

Another of its many facets

Ruy López-Nussa is also an excellent writer and essayist. And he has shown it with his volume “Rhythms of Cuba. Percussion and drums”, excellent tool for music students or for anyone interested in the subject. In the text, the collection of percussion on the island, mainly aimed at drums, is brought together in a didactic way.

Written in a pleasant and attractive language, the author exposes, without technicalities, the varied rhythms that are generated by combining Afro-Cuban percussion with drums. But at the same time it mixes this rhythmic richness with arrangements that are nourished by jazz and other musical currents.

Thirty-six years of unlimited delivery and the influence he has exerted on Cuban music show that Ruy López-Nussa is one of those men who are surprised by the magnitude of his legacy.