Sara Gonzalez – The female voice of the “Nueva Trova” 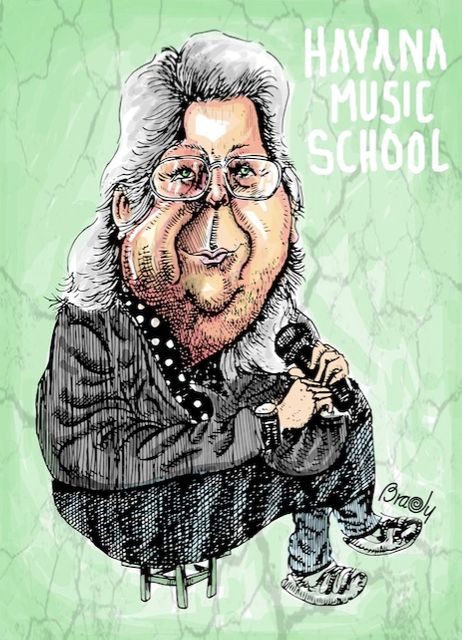 Her work as a singer-songwriter opened the way for many women who would recognize a teacher there. Her work covers social events on the island and translates them into a poetic language that reaches everyone who listen to his powerful voice. Among his most renowed compositions are: Como fiera enjaulada, Mi caballero, Mis versos, Yo sacaré lo que en el pecho tengo y Girón: la victoria.

The music in Sara’s life

Sara González was born on July 13, 1951 in the capital city of Marianao. From a young age his parents transmitted to him the love for the music, which was rooted thanks to the guitar lessons of Rafael Enrizo. In 1966, he entered the conservatory Amadeo Roldán.

There he made viola studies until 1970, when he ventured into singing. Later, as student of the National School of Art Instructors, she was under the tutelage of Leopoldina Núñez and Vicente González-Rubiera. In 1972 he joined the ICAIC Sound Experimentation Group (GESI), where he learned composition, harmony and orchestration with master Leo Brouwer.

Already in his student days he had met Silvio Rodríguez and Pablo Milanés who, together with Noel Nicola, founded the New Trova Movement. At the initiative of her friends, Sara decided to make José Martí’s Simple Versions, which would become her first album in 1975. By this time, Sara González had become the female voice representative of the new musical movement in Cuba.

An artistic career linked to society

Sara’s musical career was only on the rise. The call of Alfredo Guevara led her to make music for the cinema. In addition, he ventured into music for television and radio. Affectionately nicknamed “la Gorda”, he had the virtue of translating history into musical language.

Their songs transmitted the fragments of the most important social and political events of Cuba. Sara was a passionate singer and committed to the Cuban Revolution, and came to play with her song the heart of thousands. Her artistic career led her to share the stage with her old friends Silvio Rodríguez and Pablo Milanés, whose songs she played during her stay in Los Dimos, together with Georgia Guerra and Jesús del Valle.

These were not the only stars who shared the stage with this exceptional woman. Joan Manuel Serrat, Chico Buarque, Liuba María Hevia, Mercedes Sosa and Pedro Luis Ferrer were just some of the artists with whom he performed duet throughout his intense artistic career.

A huge loss for Cuba

Sara died on February 1st, 2012, after a long time of fighting cancer. His final wish was that his ashes dispersed in the sea at the entrance to the bay of Havana. In this way, after being dismissed at the Institute of Music on February 2nd, Sara González rests next to her beloved Havana.

Her loss was mourned by all in Cuban culture and received farewell offerings from Fidel and Raul Castro, as well as presidents Hugo Chávez and Daniel Ortega

Sara still lives in the memory of those who knew her and her presence is felt in the voice of every artist who presents herself in her Garden of La Gorda, the musical rock she created in the courtyard of the Tenth Ibero-American Center in the neighborhood of Vedado Habanero.