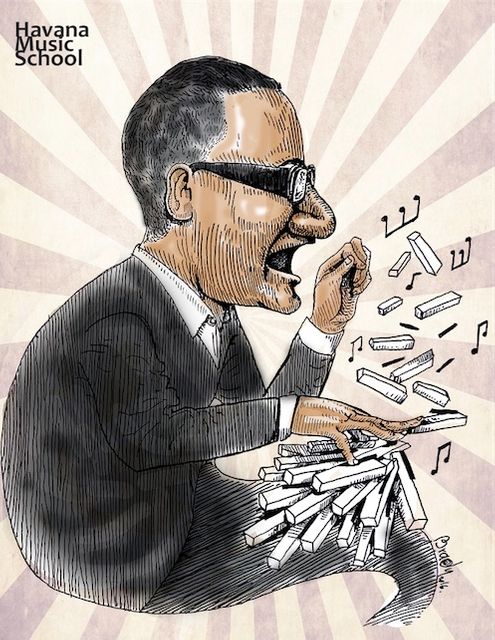 The Cuban jazz would not be complete without the figure of the virtuoso pianist and composer Gonzalo Rubalcaba.

Considered a musician of the post-bop era, he has won awards both at home and abroad. He has also shared the stage with renowned artists such as Beatriz Márquez, Pablo Milanes, Juan Luis Guerra, Charlie Haden and Dizzy Gillespie.

Birth and first steps in music

Gonzalo Gonzalez Fonseca was born in Havana, Cuba, on 27th May 1963. A member of a prominent family of musicians, he studied at the Conservatory Manuel Saumell, the Amadeo Roldan and the Superior Institute of Art. Owner of a natural talent, Gonzalo has worked for 14 years with orchestras such as Aragon, Síntesis and Van Van, among others. In addition, he has accompanied on piano soloists such as Alina Sanchez, Soledad Delgado, Ela Calvo, Beatriz Marquez and Pablo Milanes.

In 1983, his personal initiative leads him to found the Proyecto group. As a conductor and pianist, he went to several renowned festivals in countries like Holland, England, Spain, Japan, Belgium, Germany and Denmark. He is also founder of the Cuban Quartet and collaborates with artists like Charlie Haden, Jim Hall, Chick Corea, Paul Motian, and the bands Weather Uptdate and Mel Lewis, among others.

In the first editions of the Jazz Plaza Festival in Havana, he stood out with excellent piano solos, rich improvisation and a rhythmic profusion that surprised the audience. On his albums La nueva cubana (1984) and Concatenación I y II (1986), he merged the best jazz elements in themes like Rapsodia española, Pergamín, Pisando el césped and Nueva cubana. So imp

The consecration of a master

It is awarded with the EGREM 1986 and 1987 awards, and the Benny Moré Festival in 1987. That same year, he makes its first foray into symphonic music with the record Concierto Negro with the National Symphony Orchestra. This album combines Latin jazz with traditional Yoruba music and Cuban genres.

Later, in 1988, he decides to reduce his group only to 5 members and experimenting with computerized effects. Under this new line, he composed the soundtrack for the film Cartas del parque of Tomas Gutierrez. In 1992, Gonzalo Rubalcaba settles in the Dominican Republic.

Finally, he gets the Latin Grammy 2002 with Supernova, and again in 2006 with the album Solo. He has also recorded with Issac Delgado, Charlie Haden, Francisco Céspedes and Juan Luis Guerra. Today, he lives in the US city of Fort Lauderdale, Florida.