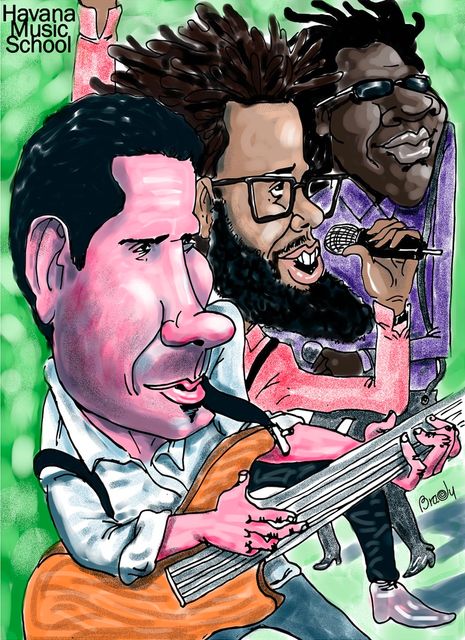 Toques de Río, founded in Pinar del Rio in March 2002, is a group that defends alternative music and whose purpose has been to give continuity to the work of relevant personalities such as Benny Moré, Rita Montaner and Bola de Nieve.

It is very popular among the young people who saw them born, but they have managed to widen their borders and bring together a heterogeneous audience that cheers them in every one of their presentations.

Toques de Río, from Pinar to the world

Fifteen years have passed since bassist Zeney Alonso decided to found a group of talented and young musicians, all members of the Hermanos Saíz Association (AHS). It has on his payroll an electric bass, piano, electric guitar, timpani, drums, trumpet and saxophone. In addition, Toques del Rio includes a tenor, a baritone and bass voices.

The group initially cultivated flamenco music mixed with Cuban rhythms and, if we consider their academic background, this trend was logical: all are graduates of the School of Ballet Flamenco by Cristina Hoyo, at the headquarters of the Ballet Lizt Alfonso. Step by step they have managed to obtain new and incredible sonorities.

When listening to any of his compositions we will be enjoying mambo, feeling, trova, son, danzón, conga, rumba and guaguancó, wisely mixed with rock, funky, blues, bossa nova, american jazz, Polka, tango and flamenco rumba. It is something amazing that sounds incredibly good.

So far, they have two phonograms. In Pa´ que te sosiegues, their debut album, they played with several styles where they revere figures as legendary and unequaled as Pérez Prado, but, in addition, they are able to walk from Los Van Van to Michael Jackson.

But other projects keep them very active, such as the soundtrack La Casa de Bernarda Alba and the musicalization of texts of one of the most prodigious poets on the island: Dulce María Loynaz.

Geographical fatalism has harmed us

Toques de Río, after 14 years of foundation, has finally been recognized outside its province. The audience can already enjoy their performances at the Pabellón Cuba, located in one of the most central areas of the Vedado capital, and in television spaces such as Cuerda Viva. In the annual gala of this program were selected as Best Fusion Band 2015.

In spite of everything, the members of the group recognize that their land has contributed with much energy and all their support to this cultural enterprise.

“Thanks to endless hours of study and rehearsal, and to having learned from our mistakes, we have arrived at this moment,” they refer with great modesty. “We are fed by Ñico Saquito, Pedro Junco, Benny Moré, Polo Montañez, Buena Vista Social Club, Michael Jackson, Stevie Wonder and Earth, Wind & Fire, just to name a few.”

According to the specialists, the projection in scene, the grace and the charisma and the originality of its members and the Cuban style, make of Toques of Rio one of the most surprising proposals of the last years.

If you want to know more about music, do not forget to subscribe to our website. And, please, help us promote good Cuban music by sharing this article on your social networks.