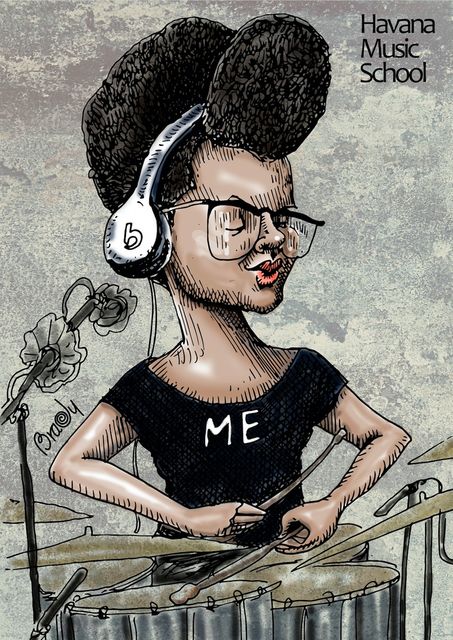 Who could imagine that this restless girl named Yissy Garcia had these skills as a percussionist? Anyone who thought it would have many reasons to do so.

First, she was born in 1987 in the Cayo Hueso neighborhood, Havana, where the rumba, the improvised jams and all kinds of rhythms are mixed. But also his father was Bernardo García, founding drummer of the Irakere orchestra, who became his greatest inspiration, first teacher and musical guide.

Start of a career

She played as a child in the Trillo Park and at the Callejón de Hamel. Her mom wanted her to be a dancer, but then she realized that percussion was her thing. She simply had to follow her instincts and study music.

Her first performances at the Charanga of the Amadeo Roldán Conservatory and at the Youth Symphony proved his talent. In 2002, with only 15 years she reaches her first laurels in the Percussion Festival “Percuba”.

Three years later she participated as a soloist in the paila with the National Symphonic Orchestra of Cuba under the direction of Zenaida Romeu. She then attends the Jazz Festival of Barbados as part of the Quinteto Chico of Havana, where she is already recognised by the media as passionate about Jazz.

It was unforgettable for her to have shared the scene at that stage with Horacio Hernández (El Negro), Giovanni Hidalgo, Arturo Tappin and Roy Hargrove.

Jazz at rhythm of percussion

Once graduated, Yissy joined the female salsa Anacaona orchestra. In festivals and national and international tours, she rubs shoulders with musicians of different genres and experiences that nourish her intensely. Her development as a young jazz talent brings her closer to stellar figures such as Omara Portuondo, Kelvis Ochoa, Bobby Carcasses, Alexis Bosch and Yasek Manzano.

In 2012 she began her solo career as a composer and leader of the Yissy & Broadband group, highlighting the temperament, versatility, dexterity and energy displayed in her concerts. Her novel proposals with a high aesthetic value recreate the fusion of Latin jazz with funk, son, salsa, rumba and electronic music.

Has it been easy?

Of course not. This young percussionist has had to deal with many obstacles, but her impetus and perseverance have allowed her to advance and harvest great successes. She recognises that she studies and listens to a lot of music to improve his performances, as well as shares the solos with the rest of her musicians, because that way the audience does not get bored.

As part of the Maqueque group with Canadian saxophonist Jane Bunnett and young Cuban stars, Oddara, her most recent recording, has come to light.

As a rising star, she has already collected lots of awards. Among them:

• 2005: Special Prize in the contest of the international festival “Fiesta del Tambor“.

• 2006: Special Mention of Interpretation in the International Festival of Young Jazzists “JOJAZZ”.

• 2010: 2nd. place of interpretation in the International Festival of Young Jazzists “JOJAZZ”.

• 2013: First place in the Drums category, in the first edition of the International Jazz Competition “Master Jam Festival”.

Also, we can enjoy her talent on the following discography