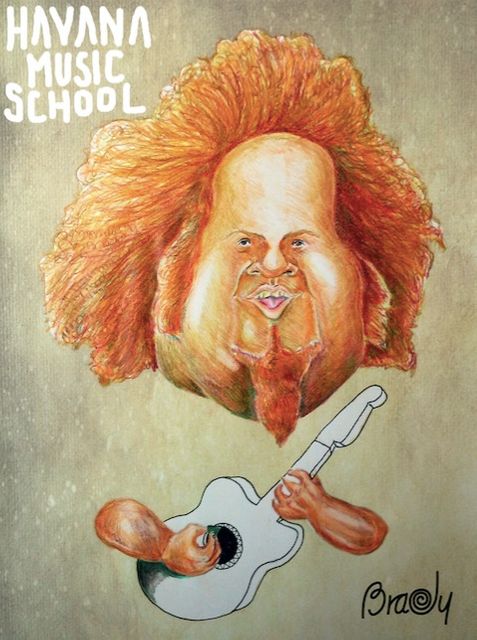 Kelvis Ochoa continues captivating with his voice several generations of Cubans. This brilliant singer and songwriter take part in the most innovative projects of Cuban music.

His unique style, which incorporates elements of son, milonga, timba, chachachá, rumba and macuta, has earned him the admiration of a heterogeneous audience looking for a different proposal of high artistic quality.

Kelvis Ochoa does not require spectacular sceneries. A chair and guitar is all that he needs to make his audience to feel at ease. Because his ability to translate each lyric into a slice of reality, his unmistakable red hair and his frank and entertaining way to interact with the public, Kelvis Ochoa is a paradigm of contemporary Cuban music.

This talented artist was born in Las Tunas, in the east of Cuba, within a family of great musicians. Being very young, he moved to Isla de la Juventud, beautiful and peaceful region where he starts music studies.

His musical interests were quickly shown. With only nine years, he sang children’s songs with her sister Liset Ochoa. And with ten years old, he integrated the choir of the Gerona´s House of Culture.

Eight years later, he joined a cultural project called Los Diablitos, sponsored by the Hermanos Saiz Association. Kelvis was ready to take the plunge and in 1992 Havana was waiting him with open arms.

Rumba and path to success

The bold young of twenty-two years arrived to the Cuban capital in really tough times. At that moment, the island lived the so-called special period. The artists were trying to create new ways to face life. Writers, actors and musicians emerged with a strong individuality and Kelvis quickly joined them, giving his own flavor to the musical projects that were brewing.

During this decade, his experience with Habana Abierta was crucial, especially when in 1999 the single Cuando salí de La Habana catapult the entire group to international success. After the experience with Habana Abierta, the musical career of Kelvis Ochoa has been always rising. Its renewing music proposes daring instrumental combinations, which includes different genres of Cuban music.

His other record companies proposals invite the public to meet with prestigious musicians Cubans on the island and abroad. In addition, his career has always been characterized by various collaborations with other well-known artists: Descemer Bueno, Carlos Varela, Polito Ibañez and Edesio Alejandro are some of them.

His experience in movies

Kelvis Ochoa´s music has also accompanied moviegoers. The great composer has put its expertise at the service of movie soundtracks like Vampiros en La Habana, Barrio Cuba, Habana Blues, Corazón del tiempo and Lisanka. His talent as music composer for the 7th Art was demonstrated in 2006, when he was awarded with the Goya Award for his work in Havana Blues.

Kelvis Ochoa is one of those artists who never go out of fashion. His proposals are still coming and people of all ages continue loving him. If you’re a Kelvis music follower, feel free to share this article on your social networks. And do not forget to leave us a comment with your opinion.