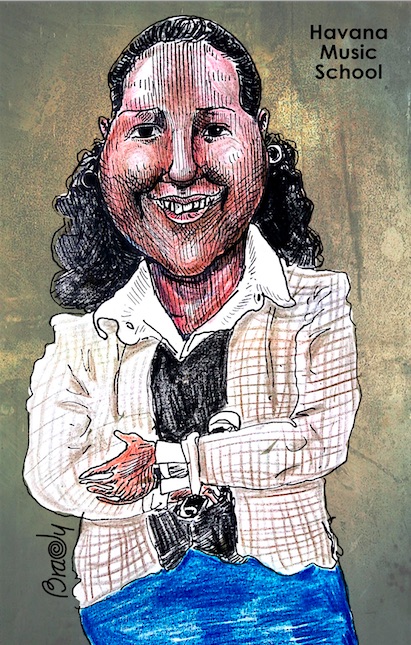 Argelia Fragoso represents perfect overlap between the innate talent and specialized studies that led to the Franz Liszt Conservatory in Weimar, Germany. Her versatile voice has led her to go to dissimilar genres: son, pop, feeling, bolero and ballad are some with whom she has shone on the biggest stages in the world.

Argelia Justina Fragoso Molina was born in Habana, May 14th, 1957. The love for the music comes from their parents, that sang to her traditional Cuban trova and allowed her to rub shoulders with artists of the stature of César Portillo de la Luz and Angel Diaz, peaks figures of the feeling movement on the island.

Since the age of eight, she shared the stage with the incomparable Moraima Secada, Elena Burke and Omara Portuondo, luxury guest at the 25th anniversary of the Aragon orchestra. Argelia had been specially invited by the maestro Rafael Lay, who knew her family and of her great artistic talents.

When beginning her studies at the National School of Arts (ENA), she decided to specialize in choral conducting, without neglecting her piano studies. In the words of the artist herself, that specialty allowed her to learn more about voice and records, and to venture into the symphony.

Even as a student, Argelia was awarded by numerous awards at Music Festivals held in Dresden or in Sopot, Poland, in which she participated thanks to scholarships in choral conducting received in Germany.

After graduating, Argelia works at the Superior Institute of Art (ISA) which creates the Eco group. Later, she taught at the ENA, alongside great professors such as Isolina Carrillo, Enriqueta Almanza and Luis Carbonell.

The song marked the life of Argelia Fragoso, especially the feeling, gender summit Cuban romantic song. The artistic life in which was plunged from very young let him know in public, on stage, and was able to appreciate the intimate encounter with her audience.

Her artistic work led her to join the popular voices around the world at a festival in held in Cuba, that captivated the audience and marked a before and after in the national scene. This idea stems from the many concerts and classes that have given worldwide and her desire that Cuba has encounters like these. Her love to the teaching has been seen in her wonderful master classes and workshops organized in the Amadeo Roldan Conservatory.

The Lady of Song

For her incredible talent, Argelia Fragoso has earned several nicknames. The Golden Voice of Cuba and the Lady of Song do justice to an artist of incredible talent and vocal range that dazzles anyone listening.