Giraldo Piloto and his progressive son 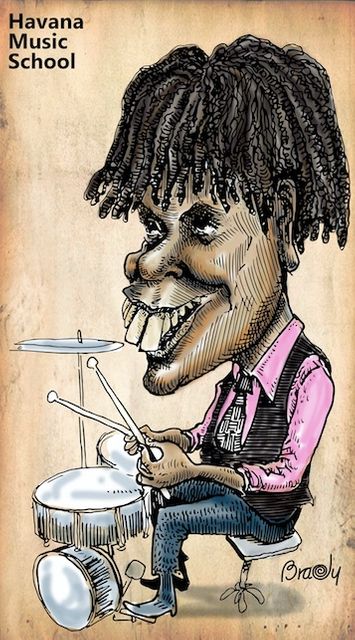 Giraldo Piloto Barreto has been inclined towards music since he was very young.

He has never denied the influence that his uncle has exerted in his way of doing. He comes from a family of musicians: his father Giraldo Piloto (renowned bolero composer and excellent violinist) and his uncle, the great percussionist Guillermo Barreto.

He has called his music as progressive son and considers the key to his success in different and special proposals.

In 1980 he graduated as a percussionist at the National School of Art. He began his professional career in the “Tropicana” cabaret orchestra which, as he expresses, “represented a great school”.

Its peek reaches it in 1988, when he joined with masterful musicians to conform the popular NG La Banda orchestra, with Jose Luis Cortés as director. This stage, without a doubt, was one of the most prolific in this group.

It is then that he manages to develop all his potentialities as composer and arranger (one of the traits that distinguish him). Their songs become so popular that they begin to become numbers one hits on the national radio, and singers as famous as Issac Delgado make them great successes.

From that period are remembered songs like El 443025, work belonging to the authorship of Giraldo Piloto, and that became one of the most widespread songs of the moment.

His prolific career as composer is so successful that many pieces of his authorship are covered by groups and soloists on the international stage.

Years of intense work make him in 1994 became the musical producer of the album Con ganas, where, in the company of the famous pianist Gonzalo Rubalcaba, achieved the Egrem Prize.

But Giraldo Piloto, in addition, it is considered as one of the best jazz drummers of the Cuban scene. During his performances, he displayed high virtuosity and good taste in his beats, and rhythmically fed the work of other instrumentalists. It’s a real treat to share scene with him.

1995 marks guidelines for Giraldo Piloto. It is time to turn all his experiences and artistic maturity. And the dream comes true. He found, with young people belonging to art schools and other orchestras, the Klímax group, of which he is currently director.

Klimax is simply synonymous with good music. With its group Giraldo Piloto has managed to record 5 discs: one of Latin jazz and one live DVD.

Although the band has never managed to get on the popularity charts among dancers, it has always been characterized by good work and has served as a school for singers who are very popular right now.

It is the title of an album that was recorded as self-homage. It includes an extensive list of first class guests: Alexander Abreu, Paulo FG, Tania Pantoja, Pancho Céspedes and Leo Vera, among others. Undoubtedly, it represents a feast for the ears.

True to its origins, Giraldo Piloto is currently the president of the Contest and Festival “Drum Party Guillermo Barreto in Memoriam“. Not to let tradition die.