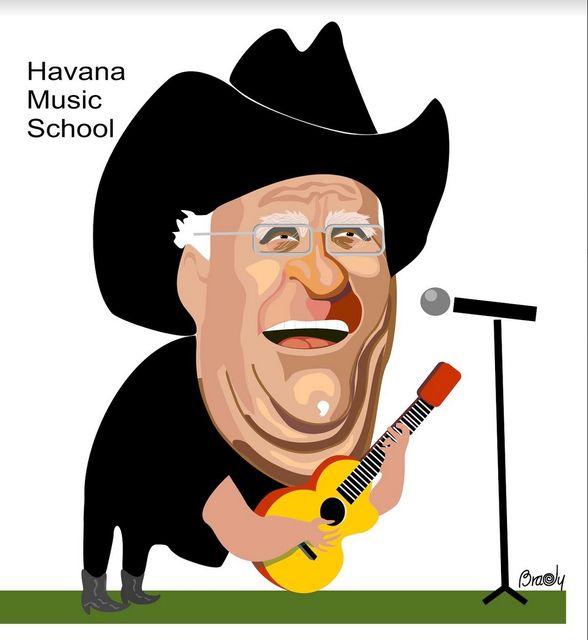 Former guitarist and one of the golden voices of the Buena Vista Social Club, Eliades Ochoa can claim without discussion the title of Master of the Cuban son.

His long artistic career has been dedicated to rescue this genre, one of the most representative of the melting pot of Cubanness. Thus, wherever Eliades Ochoa and his black cowboy hat arrives, we are sure that we are going to dance to good music.

Born in Alto Songo, in Loma de la Avispa, on June 22nd, 1946, Eliades started playing guitar when he was only 6 years old. His preparation was self-taught, encouraged by a family where his mother and father played the Tres Guitar.

Thus, he grew up with the son montuno and the guaracha, which together with the guateques formed his very traditional way of playing. Already at the age of 12, the rigors of life in Santiago de Cuba forced him to start playing in neighborhoods dedicated to prostitution to survive. In the 60s, he was a member of the Oriental Quintet and made his debut in 1963, on the radio program Trinchera Agraria, which was broadcast by CMKC. Later, he enters the Eastern Typical Septet.

But Eliades reaches his maturity by replacing Francisco Cobas la O (Pancho) of the Cuarteto Patria as director since 1978. This marks a golden age, in which he shared art with Compay Segundo, Ibrahim Ferrer and Rubén González and with whom he recorded more than a dozen albums.

Together with them, he won the Grammy award with the CD Buena Vista Social Club, in the tropical music category. This album also obtained four gold and one platinum records.

What was at that time a true revelation to the world is nothing more than the continued work of these artists for more than half a century of work for the tradition of son.

Following the success of the Buena Vista Social Club, Eliades Ochoa has continued to create albums and achieve success.

Proof of this is the album Sublime ilusión from 2000, nominated for the Grammy, which was followed by Tributo al Cuarteto Patria from 2001.

These, along with his contributions to the Continental CD, with Charles Mussewhite; and Africando, with the Cameroonian saxophonist Mango Dibango, won him the 2001 Music Prize from the General Society of Authors and Editors of Spain (SGAE) and the Association of Interpreters and Executives of Spain (AIE).

Eliades, with the Buena Vista Social Club, also participated in the film “Cubanísimo“, which obtained great recognition from international critics. Along with Miguel Barnet, he is the only Cuban to have received the Latin Awards Canada on October 1, 2018.

With more than 25 phonograms throughout his artistic career, Eliades Ochoa is confident in the future of Cuban traditional music, guaranteed by many groups in which he has even made the odd appearance to support it with his presence as a Buena Vista Social star. Club.

So now you know: if you want to know more about Cuban music, don’t forget to subscribe to our portal and help us promote good music by sharing this article on your social networks.