Female bands in Cuba: from D’Aida to Sexto Sentido 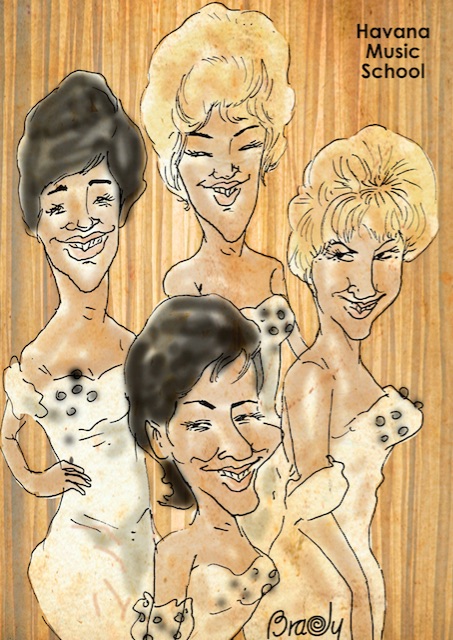 Little space we have if we are talking about female bands in Cuba who have cultivated Cuban music, or the importance that women have had in the history and development of the cultural heritage of our country.

Without wishing to list them all, we want to highlight the work of some of the most important to achieve national and international recognition. So let’s start this brief overview of women’s music in Cuba.

The group began its career inroads into Filin, rhythm product confluences of American jazz and Cuban bolero, which is the cornerstone of his style. The women’s group quickly gained fame and now known as an icon of national culture. It was also one of the female bands more persistent over time, because they disbanded in 1998.

Las Hermanas Benitez was a musician-vocal quintet from the late ’50s. It was initially composed of Beatriz, Beba, Petry, Carmen and Juanita Benitez.

When Beba retired after her marriage in Mexico, the youngest of the sisters, Haydée joins the Women’s Group in order to keep the original quintet format. The group achieved rapid international recognition, and his songs as “Corazón de Melon” and “Juanita Banana”, among others, are successes of global proportions.

Canela is a women’s group founded on August 20th, in 1989 by Zoe Fuentes Aldama, its director, and all its members are graduated from Cuban music colleges.

Furthermore, all its founders previously played classical music. His instrumental record is diverse, including unusual instruments in Cuban music as the clarinet, oboe or violin. Timba dedicated, they create their own personal musical style that mixes their training with the popular Cuban rhythms.

Son Damas is a female orchestra founded in 1992 under the direction of pianist Dalia Prada Noa. Cultivators of son, stand out for the complex development of his orchestrations, advised by the famous Cuban musician José Luis Cortés. Also they work rhythms such as bolero, salsa, rumba and cha-cha.

La Camerata Romeu is a women’s group specializing in chamber music, directed by Zenaida Romeu. Founded in 1993, it is an exceptional and unique proposition within the Cuban music scene. The Camerata is distinguished by its high level of interpretation and solid international prestige given extensive experience in many stages of the world.

Sexto Sentido is a vocal quartet of Eliene Castillo, Yudelkis Lafuente, Melvis Estévez and Arlety Valdes, created in 1997. With a solid musical training, its members have not only exquisite voices, but also proven skills as instrumentalists, arrangers and composers. Their repertoire includes rhythms such as rap, Brazilian music and jazz, including of course the Cuban popular music.

Women has participated in many other moments on the history of Cuban music. Female bands such as La Charanga de Doña Irene, Eden Habanera, Castro Sisters, Dream Orchestra, The Anacaonas, Trovadoras of Cayo, Orbe, Ricacha, Salsa Morena and many more have distinguished our culture, and therefore deserve our admiration.

If you enjoyed this article, share it on your social networks. And leave us a comment about what female voices in Cuban music you prefer.