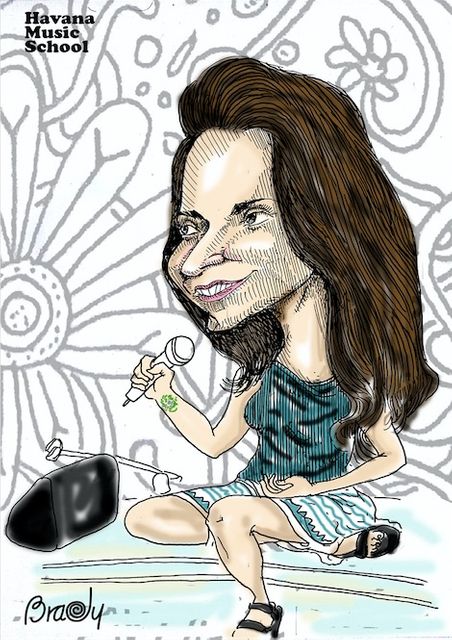 The extensive and profound musical traditions of Cuba bring often their artists to inherit their skills from one generation to the next.

But it is not necessary to have a musician in the family: their own talent is enough. Daughter of a doctor and an engineer, the young Diana Fuentes is a great example of the rhythm that runs through the veins of the inhabitants of the island.

Born in 1985 in Havana, Diana Fuentes approached the art world from 3 years. Life takes her quickly along the paths of music and, in 2001, she starts as lead singer of the recognized group Síntesis. Currently, she has accompanied some of the most outstanding figures of Cuban musical context as Carlos Varela, X Alfonso and Pablo Milanes. With just 31 years, she has recorded two solo albums, and owns a successful career as a singer-songwriter.

Although she studied at the School of Elementary Level Music Alejandro García Caturla and later joined the National School of Art (ENA), Diana Fuentes recounted in an interview her absences to class, because she preferred “live music” rather than the rigidity of the academy.

With barely 15 years, Diana began as a vocalist in the group swilling Síntesis, which combines rock with Afro-Cuban motifs. With them she recorded the albums Habana a flor de piel and Ancestros III. Soon she collaborates with other prominent musicians such as Silvio Rodriguez, Pablo Milanes and Amaury Perez.

In December 2006, she joined the band of Carlos Varela, with whom she collaborated for two years, participating in the “Paz sin Fronteras” concert organized by Juanes. But it was not until 2007, when she won the Adolfo Guzman 2007 award for playing “Decirte cosas de amor” and filmed the video clip for the song “Música de fondo” composed by herself, that Diana Fuentes reached a true recognition.

Thereafter, fame would not wait. In 2008 she recorded “Amargo pero dulce” with the support of the now famous Descemer Bueno. This CD, which would be one of the most memorable of the year, was attended by Carlos Varela (as in “Luna de vino tinto“) and Descemer (as in “Tu nombre” y “I know you need more love” ). By the diversity of rhythmic proposals, the disc is a balanced mix of rock, pop and fusion.

Diana Fuentes already has two other productions: A DVD in 2012, entitled Up into the Silence, which gives voice to the poetry of E.E. Cummings, and another in 2013 with the name Planeta Planetarium, with production of Eduardo Cabra, El Visitante of Calle 13 and current husband of singer.

Interested in other areas of the art world, the young singer has also collaborated on the soundtrack of films like “Miel para Oshun” of Humberto Solas and the documentary “Vida de Alberto Korda” by the Mexican director Alejandro Strauss.