Adrian Berazain – As the crazy ones 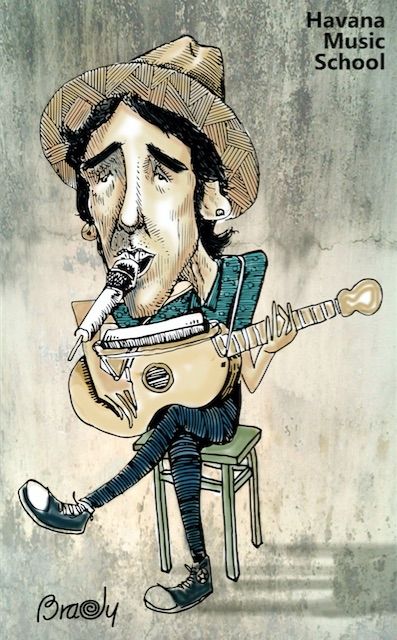 Adrian Berazain, known as the Berita, was born in Havana on April 5th, 1983.

Graduated from the Instituto Superior de Diseño (ISDI) as designer, he was related to music in a self-taught way. His first group was Carpe Diem, of which he was a part while studied in pre-university. His major musical influences as a child were Silvio Rodríguez, Pablo Milanes, Fito Páez, Joaquín Sabina and the English group The Beatles, who conditioned his taste for music and influenced the work they do today. On many occasions he performs on stage with his harmonica, which he learned to play with Frank Delgado.

He made his way among the public while working as organizer of the youth group La séptima cuerda, which was held at the Library Ruben Martinez Villena, during the years between 2002 and 2005. In addition, he has participated in various events sponsored by The Hermanos Saíz Association, of which he has been a member since 2000, such as the Romerías de Mayo, the Festival of Political Song, South of my backpack, Piña Colada and Longina.

In 2004, Adrian Berazain recorded his first demo Escúchame de un portazo and in 2006 he performed his first concert (Cantar en el Tejado) in the theater room of the Museum of Fine Arts. It was under the Bis Music label that he released his first album called Como los Locos in 2011, for which he was nominated in the categories of Opera Prima and Trova Fusión at the Cubadisco Festival 2012.

Under the same label he releases his second CD called Si te hago canción in 2014, an album that appreciates a more grown up artist that covers more genres. This album earned the Cubadisco Prize in the Trova-Pop-Rock category in 2015.

Adrian Berazain and the media

It is in 2008 that he launches its first video clip with the song Pobre corazón. His video El club de los corazones rotos, a song recorded with Diana Fuentes, won the Lucas award for best trova video in 2010. In 2011 he won in the categories of Making Of and Visual Effects for his clip La Estación and in 2013 he wins again for better trova video with his song Por encima de lo conocido, dedicated to Jose Marti.

In 2012 he won the Popularity Grand Prize of the Cuerda Viva Festival.

His artistic work has led him to collaborate in audiovisual works such as the renowned shorts of Eduardo del Llano Photoshop, Monte Rouge and High Tech, the Cuban telenovela El balcón de los helechos, the film Fábula of the director Lester Hamlet, among others.

Adrian Berazain had presented with international performers such as Manu Chau and Gianluca Grignani.

He has been presented in Venezuela, Spain, Guatemala, Panama, Ecuador, Nicaragua and Portugal.