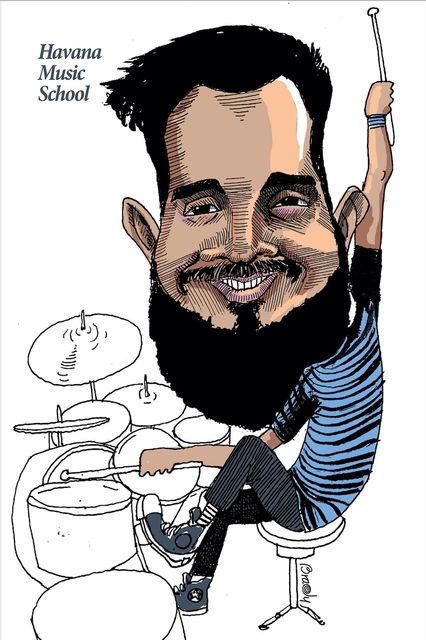 When we talk about Cuban musicians, the first thing that comes to our mind are singers or instrumentalists who have founded their own bands. Thus, we associate Juan Formell with the Van Van, Chucho Valdés with Irakere, Yumurí and his Brothers and so on.

However, there are great instrumentalists in Cuban music who have the merit of having served and serving internationally renowned musicians and groups, without attracting the lights to their talent.

The rhythm in the blood

Son of the famous guitarist Jorge Luis Valdés Chicoy, member of Irakere, it was only logical that Oliver Valdés Rey also leaned towards music.

Born in Havana, on November 11, 1981, Oliver entered the Manuel Saumell music school to study the elementary level, and then completed studies at the Amadeo Roldán middle school, graduating in 2000.

At just 16 years old, he began as a drummer in various Havana groups, sharing stages with greats of Cuban music such as Bobby Carcassés, Cachao López, Ibrahim Ferrer, Issac Delgado, Leo Brouwer, Manuel Galván, Omara Portuondo, Silvio Rodríguez and many others. He is also a member of the Interactivo project, directed by Robertico Carcassés, which has performed on stages in Latin America, the US, Europe and Japan.

Also the exclusive artist of the Sabian and Vic Firth brands, he is a jury member of the “La Fiesta del Tambor” percussion contest.

As part of this, he advocates that new generations of percussionists stop being influenced by foreign rhythms and take advantage of the advantages of living and working in a country with so many indigenous rhythms when playing drums.

For Oliver, the drums is nothing more than the evolution of the drum, so he recommends that those who start out to nourish themselves with the rhythms of this island and transfer them to the instrument. For this, according to him, it is not only important to meet contemporary artists, but to return to the origins of our Cubanness.

If you want to know more about the performance of this and other Cuban musicians, subscribe to our website. And help us spread good Cuban music by sharing this article on your social networks.